Last week has been a tremendous week for Bitcoin (BTC), as the price surged from $7,500 to $9,450. However, since the peak high at $9,450, the top-ranked cryptocurrency by market capitalization has not seen a continuation, as the price is consolidating $800 lower.

Is the halving hype over, and is the market ready for a correction after a 150% rally since Black Thursday?

The price of Bitcoin is facing a big resistance area 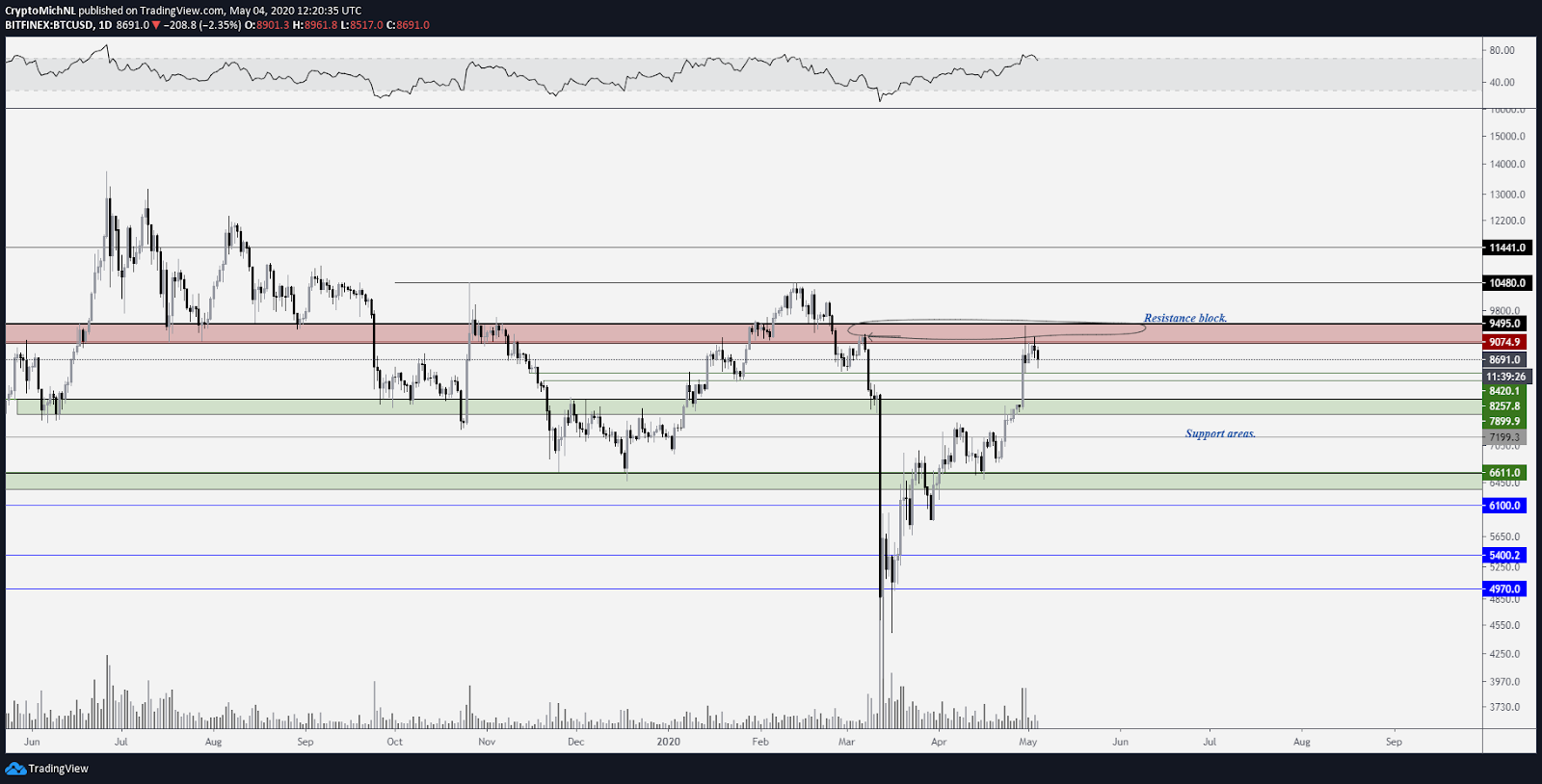 On the other hand, the red resistance area is found between $9,100 and $9,500. This resistance area was established in the summer period of 2019. During the massive run from Bitcoin that year, the price has been regularly finding support in the $9,500 area.

This pivotal area is now, therefore, strong resistance. A clear breakthrough in this zone would define a continuation to $10,500 and potentially $11,500. 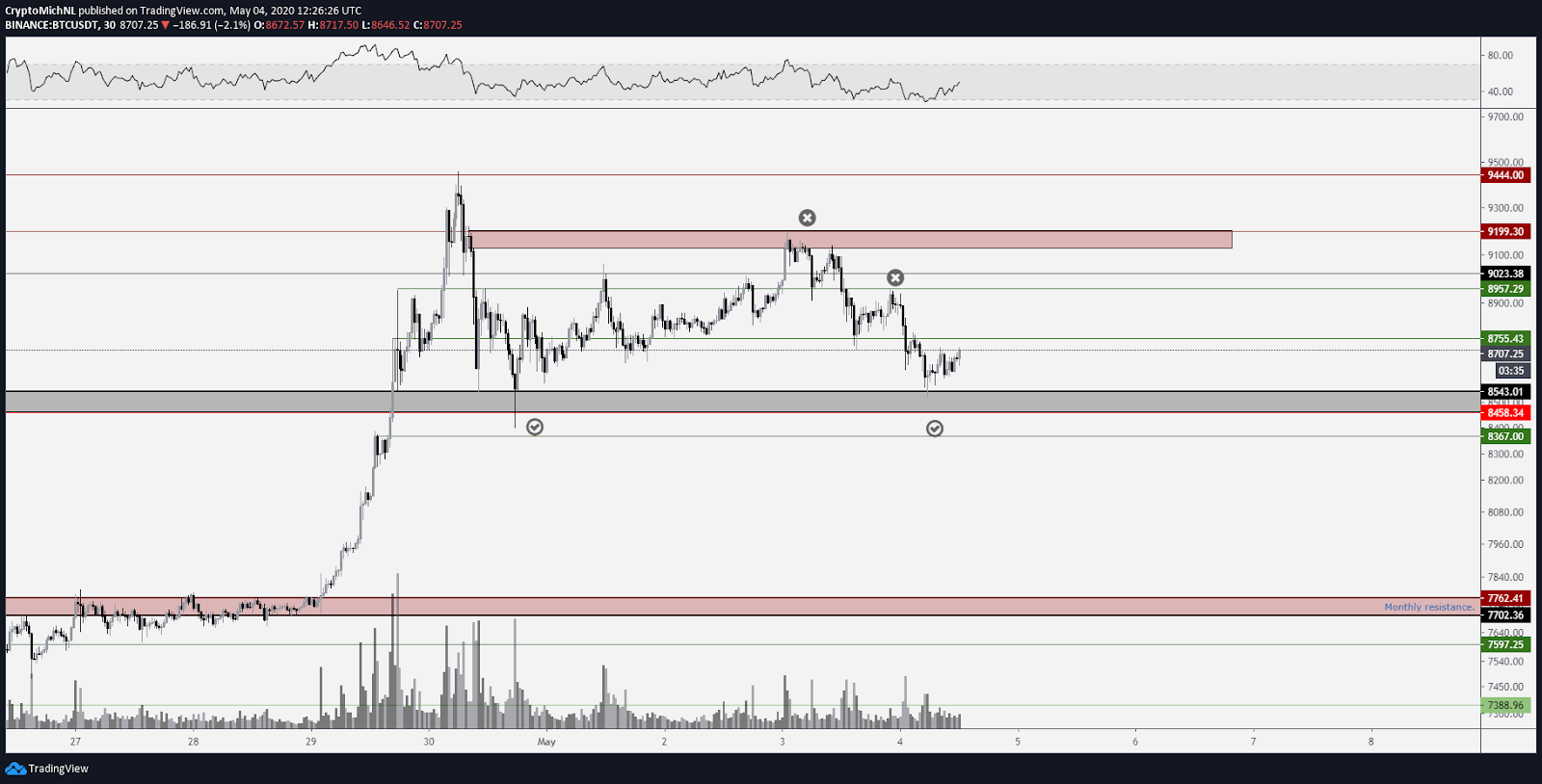 As long as the price of Bitcoin remains to be in this area, traders will be compelled to take advantage of the range-bound movements. 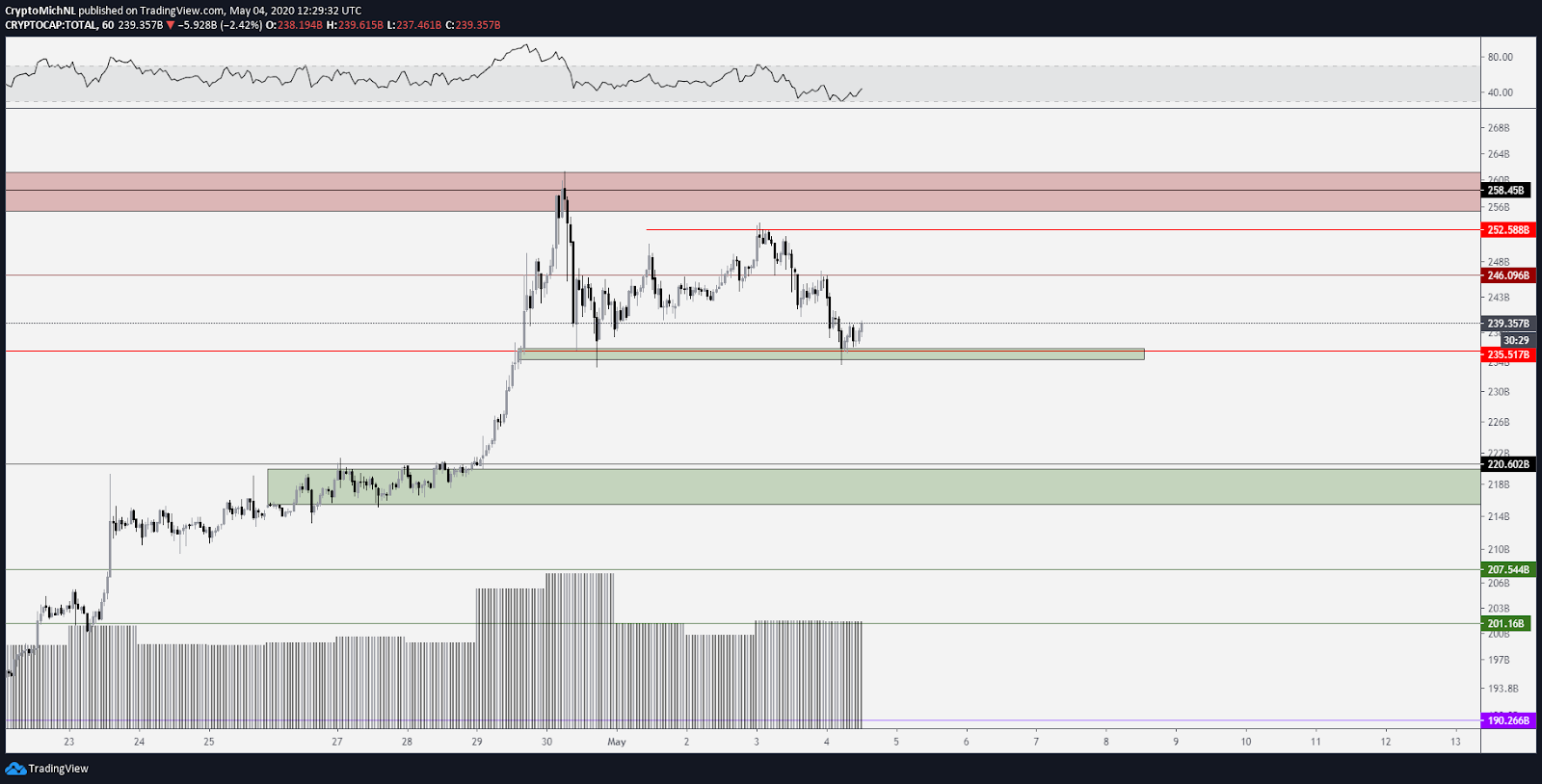 The total market capitalization chart of cryptocurrencies is showing a similar structure to the Bitcoin chart.

Clear consolidation inside a range, where $250-260 billion is the resistance area, while the $230-236 billion areas are classified as support.

Losing the $230-236 billion level as support would likely result in further downwards momentum, draining the whole cryptocurrency market down toward $215 billion as the next central pivot.

A clear breakthrough of $245 billion resistance is needed for the total market capitalization to continue its recent upward momentum. 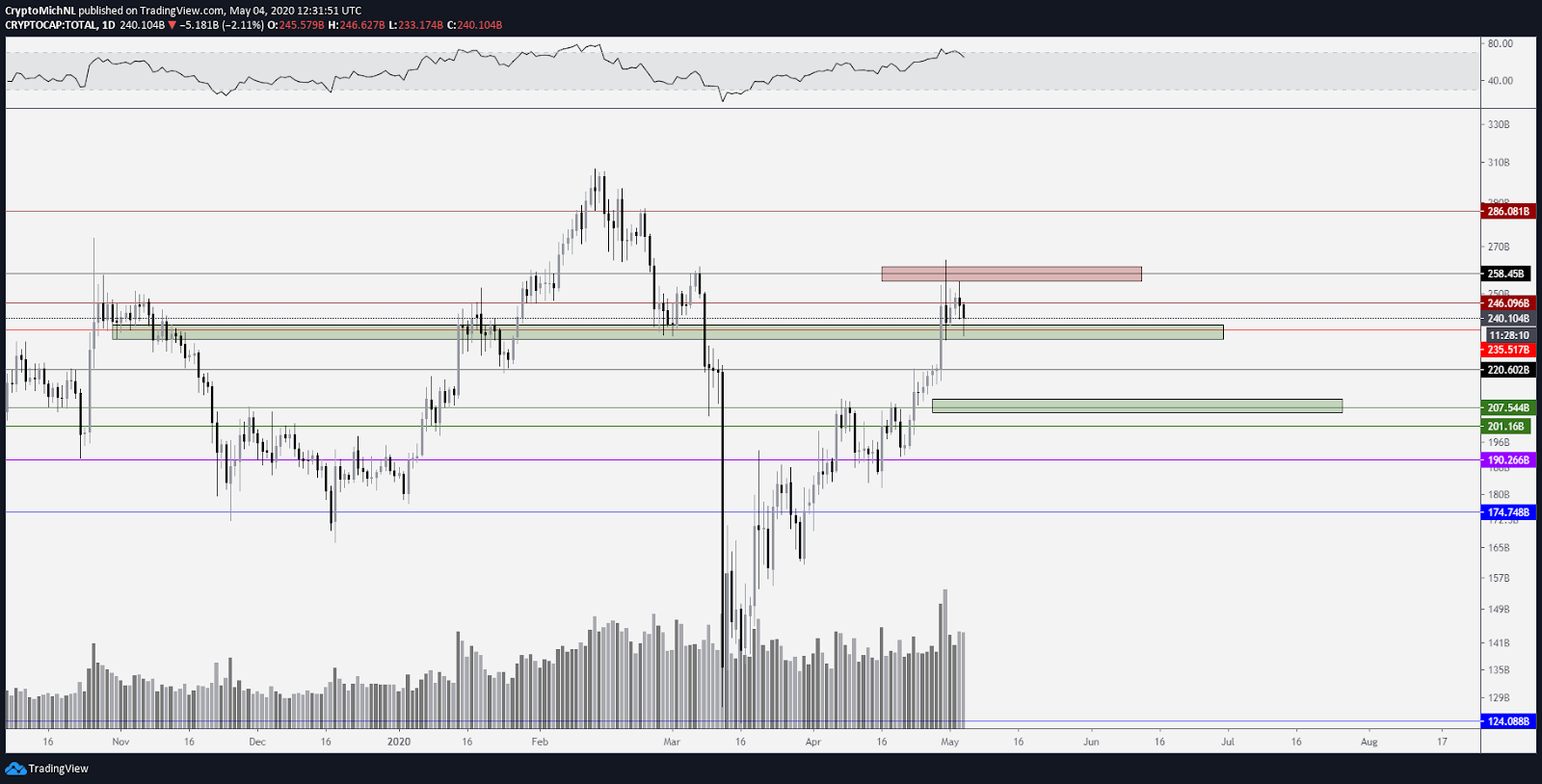 The daily picture of the total cryptocurrency market capitalization is showing a clear picture as well.

The support around $230-236 billion is a pivotal level from the past year, as the chart shows. Holding that level for support would open the door for potential tests of the next resistance around $256 billion.

However, a break below $235 billion would likely take the whole cryptocurrency market down by 10%, as the next major level is found at $207 billion.

Bitcoin dominance still going up going into the halving of Bitcoin 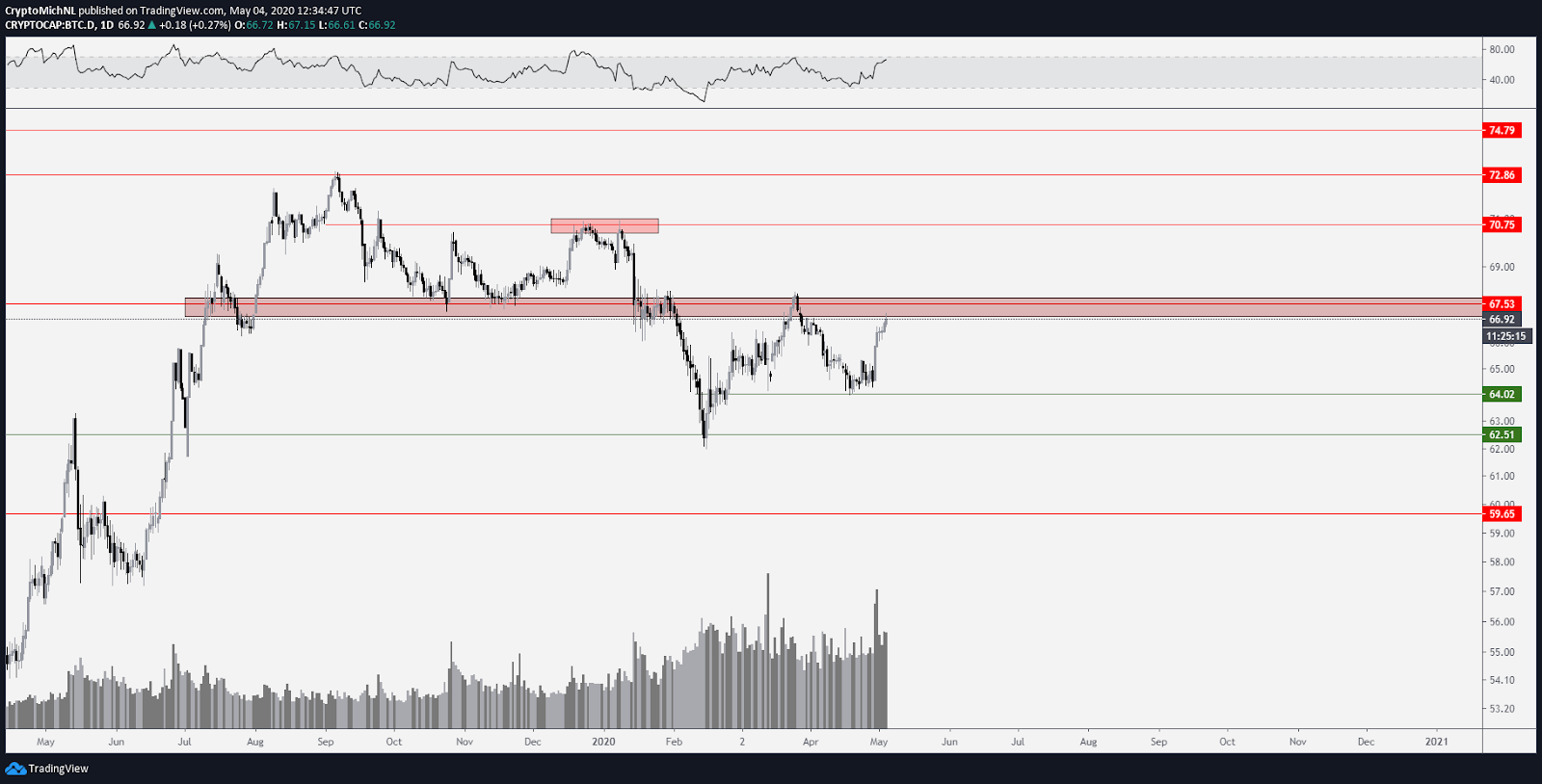 The dominance chart is getting to a crucial level for altcoins. The 67.50% level has been providing “support” throughout the past year. However, now it’s acting as “resistance,” as far as this terminology can be used for this chart.

A breakthrough above 67.50% could add more fuel for Bitcoin, as BTC/USD is clearly gaining momentum into the halving.

However, if 67.50% is again providing resistance, a further downwards break and tests of 60% could be expected. Such a breakdown can create a substantial and strong move for all cryptocurrencies.

The bullish scenario for Bitcoin 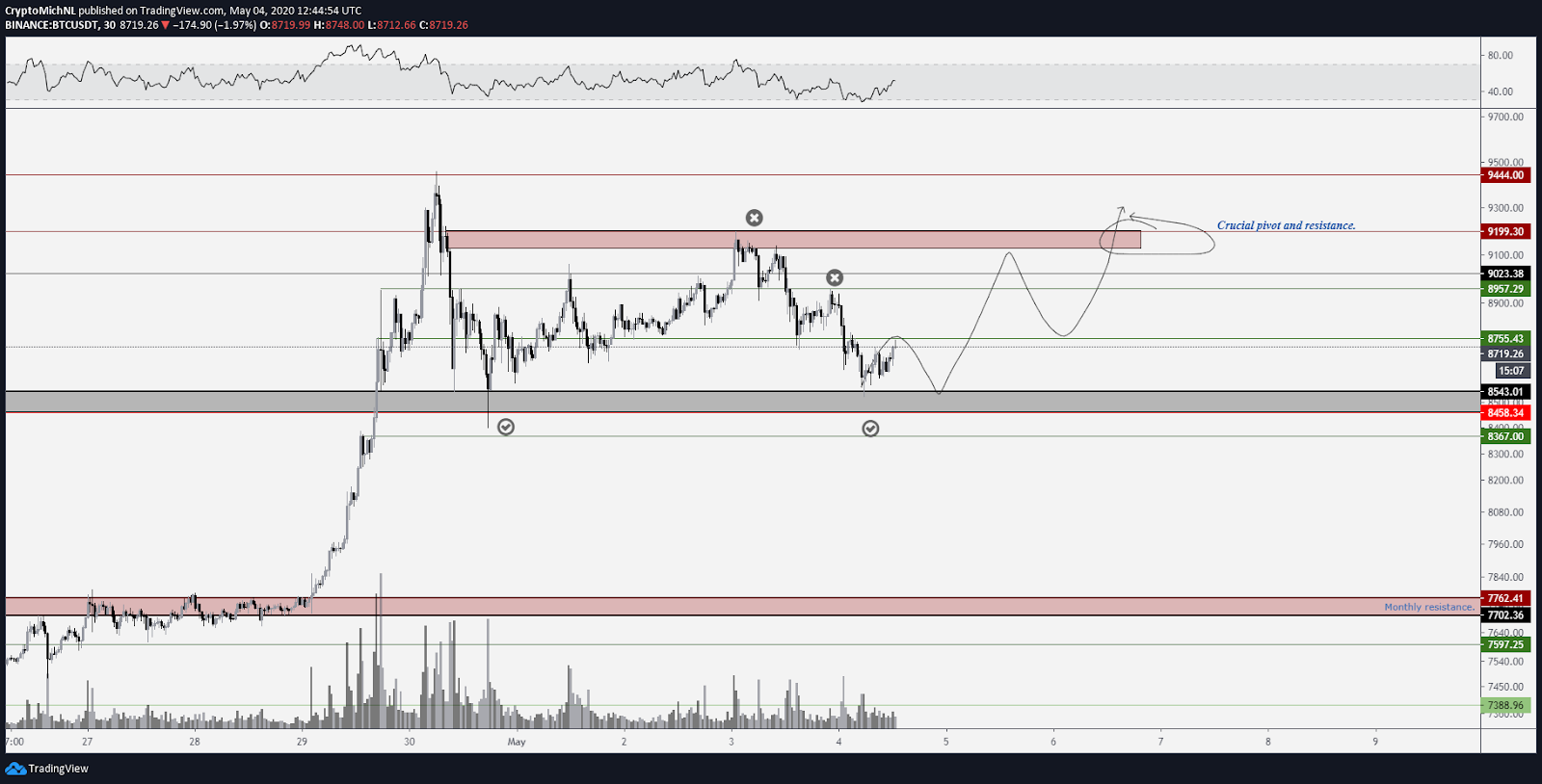 The bullish scenario on the smaller time frames is showing a few pivotal levels. The $8,400-8,600 has to remain support, as stated previously.

However, if traders and investors want to continue the real FOMO and momentum into the halving, a break of $9,100-9,200 is needed. If the price of Bitcoin rejects this level once again, the halving rally will then likely be over.

The bearish scenario for Bitcoin 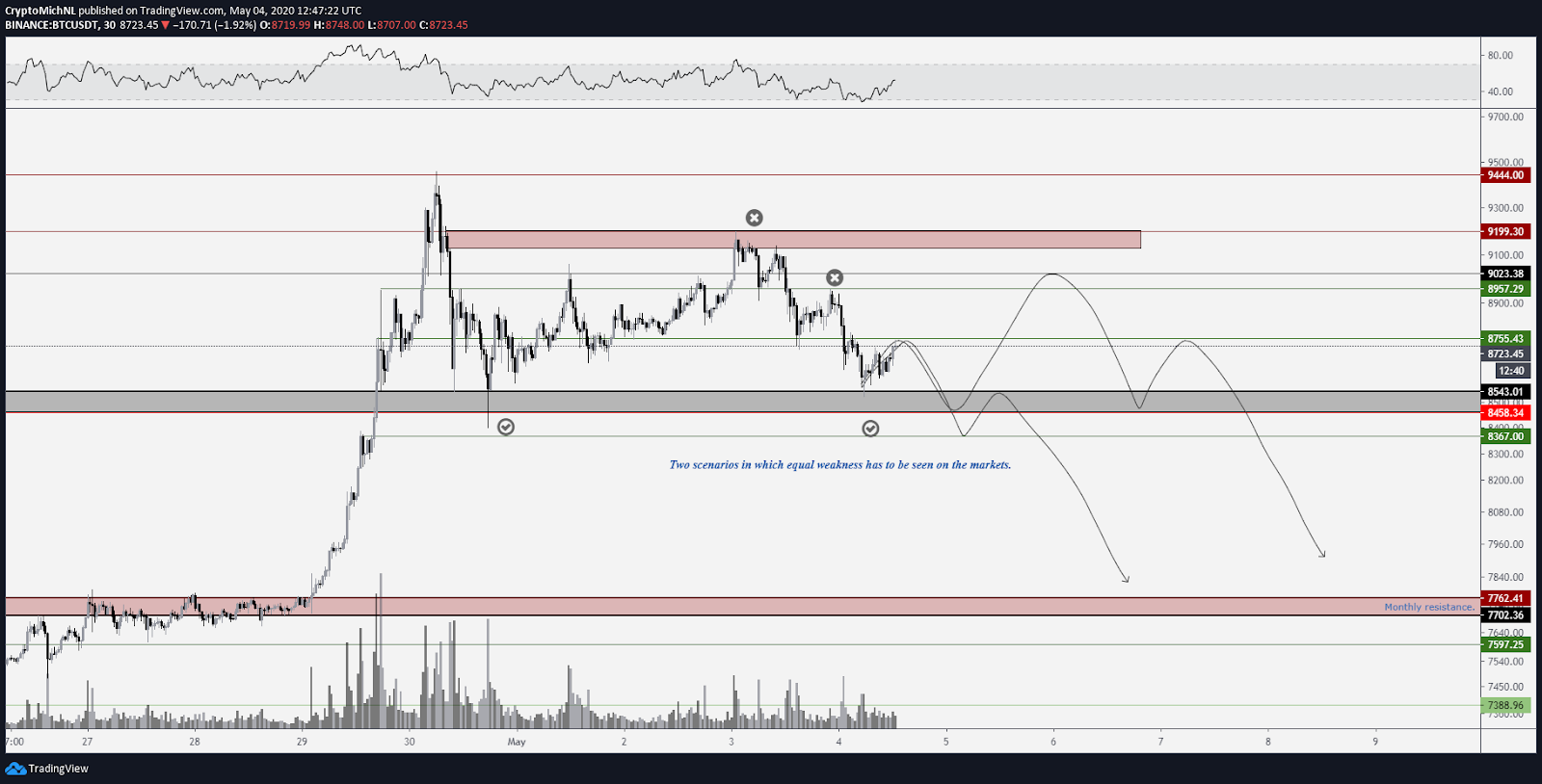 The bearish scenario has a few different possibilities. It’s basically coming down to two things, with the first being the support at $8,400-8,600. Losing that level, and it’s likely to expect further downwards momentum towards $7,800.

However, the next pivotal thing to look for in the charts would be the construction of a lower high on the chart. Once the price of Bitcoin breaks the $8,800 area and can’t clear above $9,000, a renewed lower high will appear on the chart.

Such momentum could create a potential descending triangle and a likely breakdown later below $8,400. The next support area will also be $7,800.